Jonathan and I were eating at the Indian place that we like near our work when I got a call from my landlord.

A large package was sitting in front of my door. “A Large package?” I pondered, wondering what exactly it was that I bought that could’ve been described as large.

Surely it wasn’t the HTC Vive that I bought? It would’ve been a few days earlier than expected. Nonetheless, Jonathan and I quickly finished our meal and headed  back to the apartment.

Much to our surprise, it was indeed the Vive. Without exchanging a word, we both knew what we’d be doing for the rest of the day.

The packaging of the Vive is quite well designed. The box exudes a sense of luxury, with ample packing foam. The box is actually much larger than needed, but it’s cool looking enough that I would consider putting the front up on a wall. 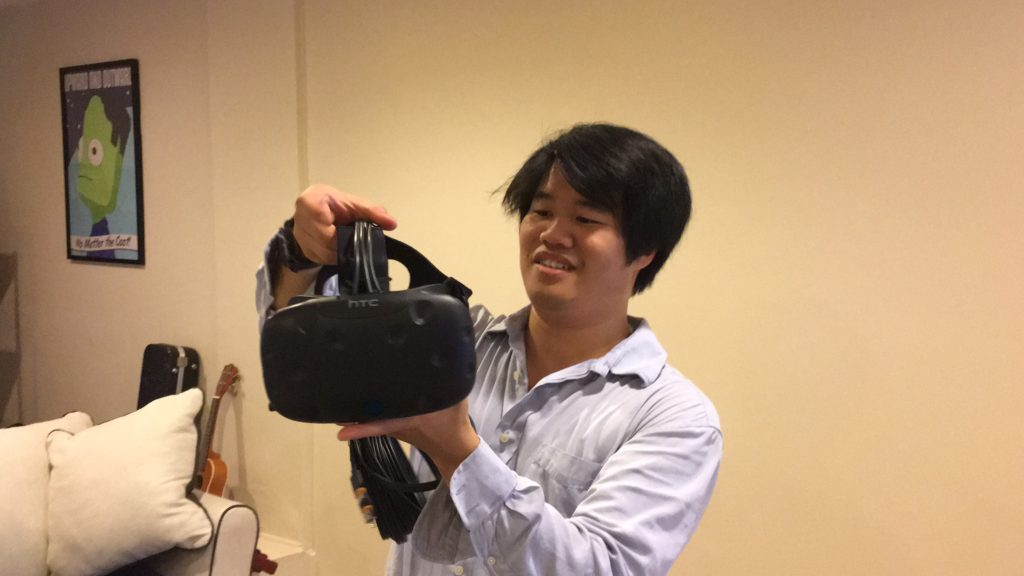 The unit itself is the centerpiece of the whole thing. It’s not an elegant design as compared to its competitor, Oculus Rift, but then again, it’s more about the functionality over the aesthetics when it comes to prototype/developer stuff, in my opinion.

Setting it up was not terrible, but it did take us about an hour. I had some tools available, so getting to work making a hole in the wall to screw the lighthouse sensors on wasn’t a huge issue. I would imagine that someone with no tools or not allowed to make holes in the wall would find this step more challenging. It was easy sailing for the rest of it; As the Vive Setup took us through all the steps of setting up the room, pairing with the sensors, and creating measurements. I had the games downloading while Jonathan and I finished the hardware setup so it would be ready as soon as we finish the calibration steps.

The first game we had to try was The Lab by Valve. Online posts tout this as the definitive “First” VR experience, and they were absolutely right. Stepping into the Lab, I was immediately enthralled by the lush landscapes of Vesper Peak, a mountain range near Valve’s headquarters. A portal-esque puppy approaches on the horizon, and I bend down to touch it. It reacts. The feedback was immediate and it all felt very natural. I’m not arbitrarily pushing a button to interact with the dog, I’m simply interacting with it.

Soon it was time to try something more active. I loaded up Longbow, another mini-game from The Lab that has you defending a castle from a Viking horde. The bow mechanic had the player nock the arrow into the bow using both hands, and move their arms to aim and shoot the bow. Having used a bow before, it felt immersive and intuitive.

Jonathan and I tried a few more experiences before the day was done, but I knew that this was the beginning of something special.