This weekend, I spent a few days in New Orleans to participate in the future leader’s forum. Of course, no visit to New Orleans can be complete without experiencing the food, music and culture that the city has to offer. After arriving at MSY around 6AM, I rode an airport shuttle that took me directly to the Intercontinental Hotel, which was a convenient location to visit the French quarter.

Our first stop took us to Mother’s, an restaurant that locals call an institution of New Orleans. They are most famous for their Po’ Boys, which is a traditional sandwich from Louisiana that contains sloppy roast beef with some history. Originally known as a “Poor Boy”, the sandwich uses french bread and roast beef that has been seasoned with beef stock for several hours until it falls apart, then simmered some more to absorb the flavor.

Of course, I also got a chance to try some real southern grits, which is hard to come by in California:

The flavor of the grits reminds me a little of cornbread with a neutral taste; It’s meant to be used as a vehicle for other flavors and condiments. Typically, salt, pepper, butter, and hot sauce is provided to allow patrons to enjoy grits to taste. I ended up using copious amounts of their in-house hot sauce on mine. Definitely not my go-to, but I can certainly appreciate.

Walking further into the French quarter, we pass into the Marina and ended up at Cafe Du Monde, an icon of New Orleans and the uncontested place to get the best Beignets. This was when I began to understand the style of the food here in New Orleans; The powdered sugar stacked high screams of a decadence that few other cuisines can boast. The dessert was merrily enjoyed and the coffee was a great pick-me-up amid the hot summer day. 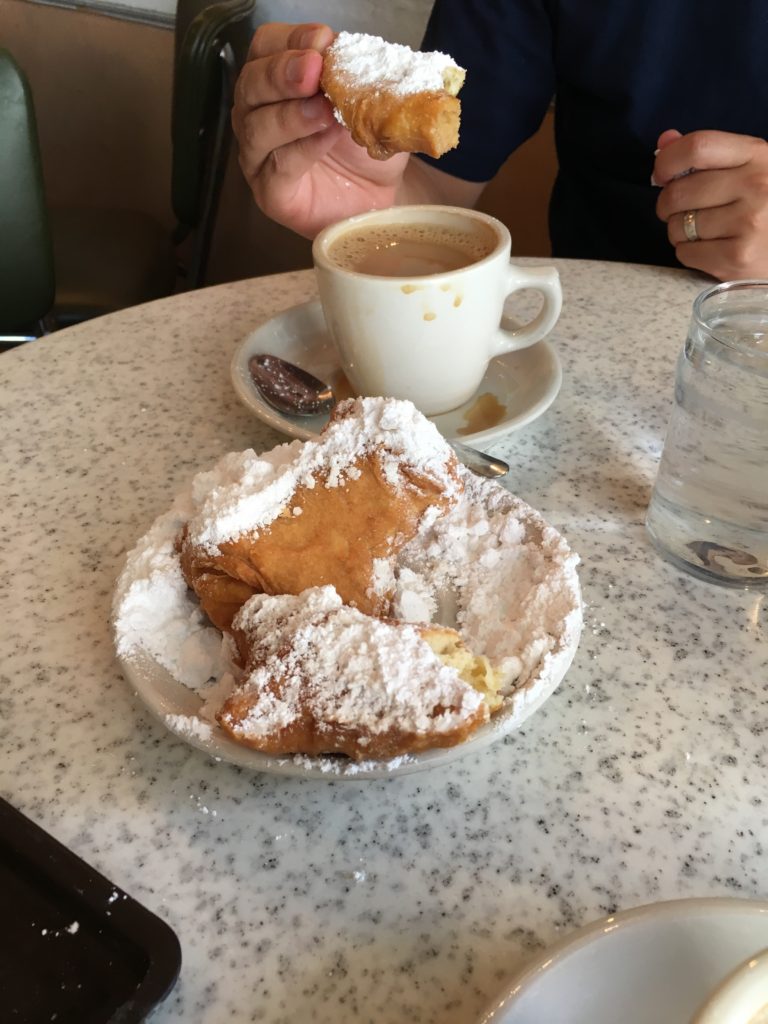 During our trip, the conference also provided a dinner party on a boat; we had a chance to enjoy a trip down the Mississippi river on the Natchez, an authentic steamboat that has been repurposed for entertainment. We were able to visit the engine room, as well as take in some of the local Jazz music while on the boat.

The conference also took its attendees to Mardi Gras World, the warehouse where all of the parade floats are kept each year, and where some of them are made.

There was actually a venue at the back of Mardi Gras world that is very reminiscent of the Blue Bayou; A southern night scene with a faux plantation style house in the background.

Overall I had an amazing trip this summer to New Orleans; I was very glad that the conference incorporated many of the city’s offerings, and have found the people there to be quite friendly and the food delicious. I’m looking forward to visiting again during the food and wine festival in February!